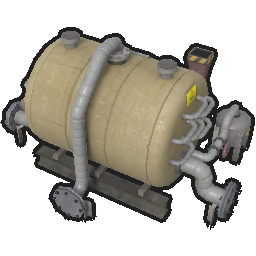 The Boiler (Gas) is a machine which creates Steam from Water using a variety of petrochemical fuel sources. This machine is most commonly used in the early game to reduce the consumption of Coal by replacing Boiler (Coal) units and instead burning Heavy Oil, Naphtha, though there are additional options available with Medium Oil, Light Oil, and Fuel Gas. In the mid-game, the machine is commonly seen in conjunction with petrochemical processing chains unlocked by the Advanced Diesel research.

It can also provide power from the burning of Hydrogen sourced either from the breakdown of Ammonia in an Electrolyzer or alternatively the splitting of Water in the same. It should be noted that the latter method is a vastly inefficient power source and is net energy negative, but does create small amounts of Water as a byproduct if both Low-pressure Turbines and Cooling Towers are used to recover the Steam Depleted.

In mid-game petrochemical processing chains, this machine is often used to burn Heavy Oil to generate Steam Hi which feeds the refinery. One Boiler (Gas) burning Heavy Oil can generate sufficient Steam to fully supply up to two Distillation Stage I's, Stage II's, and Stage III's each plus one Sour Water Stripper, leaving 5% leftover Heavy Oil to be disposed of. This arrangement would need to be initially primed using a Boiler (Coal) until sufficient Heavy Oil accumulates to power the Boiler (Gas) full-time at which point its supply can be removed, either by deprioritizing the input using a Pipe Balancer, removing its Water source, pausing it, or deconstructing it.

Any Fuel Gas remaining from conversion to Diesel in the Cracking Unit and any Naphtha left over from the production of Rubber in the Rubber Maker need to be removed to prevent the refining system from idling when either output is full. Both products are typically diverted to generate Electricity using this machine. While flaring is an alternative, it produces 25% more Air Pollution for Naphtha (1.5 Air Pollution/unit vs 2.0 Air Pollution/unit) and 500% more for Fuel Gas (1.0 vs 0.17/unit) than boiling it into Steam Hi, even if the power production is wasted. Thus any excess Heavy Oil from the first boiler should be burned first, then any excess Fuel Gas from Diesel production, then any excess Naphtha from Rubber Production (or later, Plastic or Diesel production).