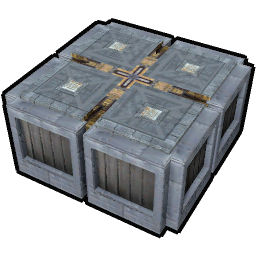 Allows distributing and prioritizing products using any of its two input and output ports.

The Flat Balancer is a transport with four Flat Conveyor ports. Its serves two different but important roles: to allow for the balancing of units between multiple inputs, multiple outputs, or both; and to give the capability to be able to input or output from a specific Flat Conveyor connection.

On one side, one port is marked X while the other port is marked O. The same is true likewise on the other side but with reversed coloring. While there are two chevrons painted on the machine and the in-game description would seem to indicate that two must be inputs and two must be outputs, any of the 4 connections can operate as either inputs or outputs, though obviously there cannot be four input or four outputs at the same time. Input or output determination is done automatically using the belt direction of the conveyor attached to that port. Thus, rotating the balancer 180 degrees only has the effect of switching which side the X and O letters and chevrons appear on the transport graphically and rotating the balancer 90 or 270 degrees only serves to change which colors the port labels are on any given end.

The player can open the balancer's UI by clicking on the transport. Three toggles are available:

In other words, the first toggle is provided to mark the incoming X port as the one receiving input priority. The second toggle does the same for the outgoing X port. The third toggle changes all instances of the letter X to O on the UI and applies the equivalent logic to balancer. It is possible to enable one, two, or even all three toggles simultaneously depending on the desired use case.

If neither the first nor second toggle are activated, the transport will attempt to pull equally to from the number of connected inputs and push equally to the number of connected outputs. In this case, the third toggle has no impact whether set to on or off. This means that that a single balancer can act as a perfect "1-to-2", "2-to-1", "2-to-2", "1-to-3", or "3-to-1" balancer simply by connecting conveyors with the desired direction of flow.

The only limitation is when both priority input and priority output are desired at the same time and there are two inputs and two outputs connected. In this case, the priority choices can be only be "from X to X" or "from O to O" as the the third toggle swaps the letters of both ports at the same time. This limitation can be bypassed by swapping the two input conveyors or two output conveyors physically and is typically not an issue except in very compact builds.