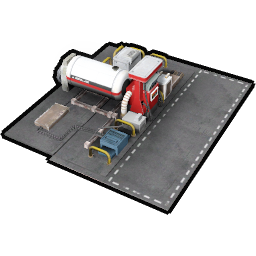 Trucks assigned to a fuel station will automatically refuel excavators and tree harvesters at their working site so they don’t waste their time going for fuel on their own.

The Fuel Station is a building which greatly simplifies refueling of vehicles by allowing for the assignment of fuel trucks, service as a personal refuel point for non-assigned trucks, and providing a small

Assigning Pickups will allow for the delivery of fuel directly to the vehicles in mines. As Pickups have a much larger carrying capacity than the fuel tanks on Small Excavators, they can effectively refuel 3-4 Small Excavators per trip while traveling from point to point at a greater speed than the Small Excavators can. Likewise, full-size Trucks can be assigned to provide similar service for the full-size Excavator. While it is possible for Pickups to refuel the full size Excavators using multiple trips, it is much more efficient to simply assign the larger trucks when possible.

The Fuel Station UI offers a toggle which determines if non-assigned trucks are allowed to use that particular station to refuel themselves. By default, this option is enabled. As only one vehicle can refuel at a given time, it is recommended to have one station with access only granted to refueling trucks and another with access granted to all vehicles to prevent bottlenecks which would allow excavators to run out of fuel if the queue is long.