A settlement is either a single standalone Housing building or, more commonly, multiple Housing buildings built immediately adjacent to each other. This is where the Population lives and where the residents do almost everything: sleep, eat, maintain their hygiene, and enjoy Household Goods and so on. The only except is work in buildings or vehicles. 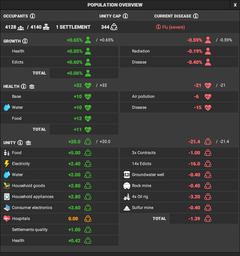 Each settlement requests services to be provided to increase the comfort of the Population. Only

Waste collection are essential services. If these services are lacking, critical population decline will occur.

Other services are not essential, and there is no penalty for lacking services. But fulfilling these requests provides a set amount of Unity and/or promotes Health per request. They are helpful in a steady source of Unity, used for Research Lab (and its variants) and outposts such as the Sawmill or Oil Rig. They are also helpful to combat the bad influence of Air Pollution and Water Pollution.

The Population Overview UI pane as seen to the right is accessed by clicking the Population icon at the top-left corner of the game screen and displays the total amount of Unity received from meeting demands.

All services are shown in the following table.

The demand for food depends on the type of food, and it is a bit complex to calculate the amount. As a simple example, when only single food is provided to settlements, the demand for food will be the following value.

When several types of food are provided to settlements, the demand for each food will decrease, and the total for all food will be similar to the case of the single food provided. The exact value at version 0.4.9 can be calculated in the following formula.

For example, Potato, Corn, Bread, and Vegetables are provided for 1000 pops:

As of version 0.4.10 and later, the above formula is approximately correct, but it has a small error (presumably as a result of the related code being changed), so don't rely on it completely.

Unity and Health bonus by food

For example, Potato, Corn, Bread, and Vegetables are provided:

The Health bonus depend on the number of food categories provided to the settlement:

For example, Potato, Corn, Bread, and Vegetables are provided: